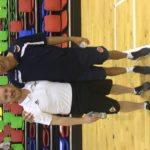 After two games against a youthful Northern Ireland we can look back on this encounter with a feeling of satisfaction.

In een equal first game, in which the opportunistic play of both teams served the audience a nice game, we finally lost 1-2. In the second game I instructed my players to control the game more and not follow them in their physical power. This resulted quite quickly in goals and we rested satisfied with 3-0 half time score. In the second half it was important to keep Northern Ireland away from the goal leaving the side only one down and to score the 4-0 ourselves. We changed again after Northern Ireland scored 4-1 by playing powerplay; that’s how we brought the game to a happy conclusion.

Final conclusion: with more training games Malta can cut even a better figure. Northern Ireland is a rough diamond: in January we will meet again. Let’s see if we improved by then

The Henry V. Moran Foundation supports children with a deprived social background through Futsal and that’s exactly what I’m supporting for 35 years. Therefore I immediately had a “click” with Danny Moran and I would recommend you highly to visit his website: www.moranfoundation.com